Skip to content Skip to navigation
See our Campus Ready site for the most up to date information about instruction.Campus ReadyCOVID Help
Medical Education Collaborative 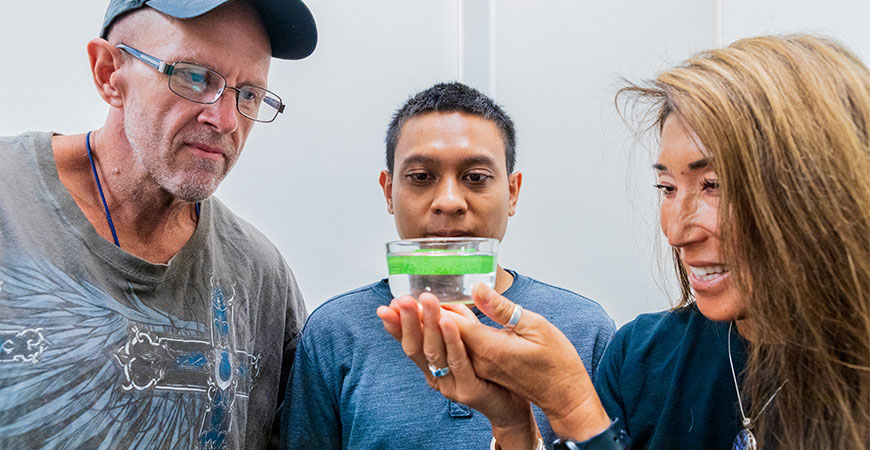 Professor Nishiguchi, right, shows one of her squid hatchlings in her lab.

As a young child, Professor Michele Nishiguchi would dive off the couch and into the shag carpet reefs of her family home, mimicking the turns and leaps of intrepid explorer and environmentalist Jacques Cousteau. This love of the ocean would remain with Nishiguchi as she progressed through her academic career.

Now a professor in the Department of Molecular and Cell Biology in the Schoolof Natural Sciences, her lab studies the relationship between ocean microbes and Bobtail squids.

Looking around the lab, with its ocean microbes in frosty freezer vials and precious squid specimens preserved in jars, one would think Nish and her team are marine biologists. But Nish, as she likes to be known, describes herself as an “evolutionary biologist who studies the impact of microbes on organisms and how microbes interact with the world around them.”

So why ocean microbes and squid?

“Their relationship is dynamic and fascinating. The two organisms are so evolutionarily far apart but still able to communicate and interact with each other for mutual benefit and survival,” Nish said.

At UC Merced, Nish and her team research the dynamic relationships between the Bobtail squid and Vibrio bacteria. There are approximately 20 labs nationally that use this species/host model but only Nish’s lab is investigating all the different species of Vibrio and their coevolution with their squid hosts across various locations.

Just like the beneficial microbes living in the human gut and affecting digestion and nutrient uptake, Bobtail squid harbor special ocean microbes, bacteria in the genus Vibrio. These bacteria are taken up by the squid into specialized “light organs,” where they have a safe niche to multiply and provide the squid with a luminescent glow. It’s a delicate balance that requires communication between the bacteria and the squid: Too much growth could harm the host and too little means no benefit.

Though humans don’t gain luminescence, we do strengthen our gut health when we consume probiotic bacteria from foods such as yogurt or kombucha. The bacteria break down food molecules that we can’t on our own. They colonize our gastrointestinal tracts and deter disease-causing, harmful microbes from establishing. As with the squid, even healthy bacteria can overgrow and cause harm, leading to gut irritation, inflammation and sometimes, chronic disease.

Only certain species of Vibrio can thrive and colonize the Bobtail squid’s light organ, indicating an evolved preference for one species or strain over the other, Nish and her students discovered. Examining this relationship sheds light on how host organisms manage and select beneficial microbes and what communication mechanisms are involved.

For Nish, coming back to California meant coming full circle She is a product of the UC system and a proud recipient of three UC degrees: her bachelor’s degree at UC Davis, master’s degree at UC San Diego, and PhD at UC Santa Cruz.

But she has been all over the world studying squid. She relocated her lab from New Mexico to UC Merced during the COVID-19 pandemic, setting up a new squid hatchery to raise the model organism, reestablishing protocols and restarting experiments from scratch. Some lab members drove the precious frozen bacteria cell strains, preserved on dry ice, from New Mexico to California.

Just as there is more than meets the eye with the Bobtail squid, Nish and her team are multifaceted, exhibiting expertise from a range of fields such as microbiology and evolutionary genetics. Nish hopes eventually, her lab’s findings could lay the foundation for answering questions about humans and microbes.

“Perhaps, one day, the bobtail squid and Vibrio will help us answer complex questions regarding our own relationships with microbes,” Nish said.